Clevedon Tang Soo Do est. 1992,
over twenty-five years of martial arts for all the family.

The Origins of Clevedon Tang Soo Do

For our 20th anniversary we have taken a special look back at how Tang Soo Do was established in the West Country.

Tang Soo Do was officially established in the South West and Wales by accomplished Grand Master Tong Mun Kim. G.M. Kim opened dojangs in Cardiff in 1978 and Bristol in 1980 remaining in the UK until 1984.

On the 10th of September 1992 Clevedon Tang Soo Do was established by Master Brian Alden and Brian Blight, two former students of G.M. Kim, as an offshoot of the Long Ashton Tang Soo Do club, which eventually closed. Their first student was the now Chief Instructor and took over full running of the club in 1999.

We spoke to Master Alden about the early days of Tang Soo Do in the West Country.

What was G.M. Kim's teaching style like?
He was a very good. He coped with a large age range very well he knew he could push the adults harder than the children, but he was very strict, no one misbehaved, you wouldn't step out of line

Did he teach at all the clubs?
Yes, the main one was in Cardiff, but he taught in Bristol twice a week.
So, everyone was taught by him, he ran the classes?
Yes, him or his sons, they were very good too.

What equipment did you have in the early days?
Nothing, just pieces of think corrugated cardboard as kick shields.

Like we had at the beginning of Clevedon?
Yes, just cardboard. Punching was done to air, quite hard. Of course we didn't know then about what stress that was putting on the joints.
I remember when we first got kick shields, they were a luxury.

Did you get your black belt under G.M. Kim and what was that like?
Yes, intense! We went to Cardiff and we had to write our essays during the grading! We were going last of course being seniors so we had time, but you had to make sure you had everything together before you went. We had to break a house brick and if you didn't at least try you failed, a very intense day!

Did you see him again after he left for America?
Yes, in 1993 I went over to train with him for a week. He had a large dojang. He turned to me and said, "Mr Alden, you can take the class" and went off to his office.
That shows a lot of faith in you.
I was a black belt.

What happened after he left for America in 1984?
He left one of his sons in charge, but he (also) left for America about a year later. Everyone just went their own separate ways joined different Tang Soo Do associations. Eventually, I said to Brian let's go our own way so we joined the Amateur Marital Art Association.
Which led to the establishment of the Long Ashton club and then Clevedon in 1992.

Thank you for speaking to us do you have any inspirational thoughts for today's students?
Be true to yourself. Don't talk back to your instructor, don't forget your instructor has already been there and done what you are doing. 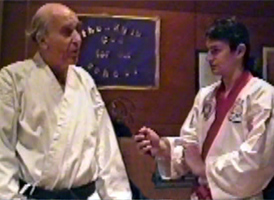